Is there anything better than a fresh, juicy shrimp? These small crustaceans are one of the most popular seafood dishes globally and for a good reason. They’re versatile, tasty, and easy to cook — but what if they are frozen? Can they be defrosted in a microwave?

In this article, we’ll tell you exactly how to defrost shrimp in the Microwave and answer all the questions you may have on defrosting frozen shrimp. Plus, we’ll give helpful tips to ensure that your meal is perfect every time!

Can you defrost shrimp in the Microwave?

Yes, defrosting shrimp in the Microwave is possible. However, there are some things that you want to pay attention to while defrosting in the Microwave though. One concern is that microwaves generally defrost from the outside in, and because shrimp has a tough outer covering that holds heat, it may begin to cook if it’s heated for too long.

Defrosting for longer than recommended may result in a difference in the taste and flavor of the shrimp once it is cooked.

Another thing to watch out for when defrosting shrimp in the Microwave is to use the correct power setting or defrost mode. If you nuke the frozen shrimp on high power while defrosting it or defrosting for too long, the shrimp will become overcooked and tough. Furthermore, different microwaves use higher or lower wattage which can affect the microwaving time.

As such, before you start defrosting your frozen shrimp in the Microwave, make sure that the power setting is set to 30% power or on defrost mode. Overall, defrosting in a microwave can be done but requires some attention to ensure that you don’t end up cooking your food and spoiling it!

Why defrost shrimp in the Microwave? 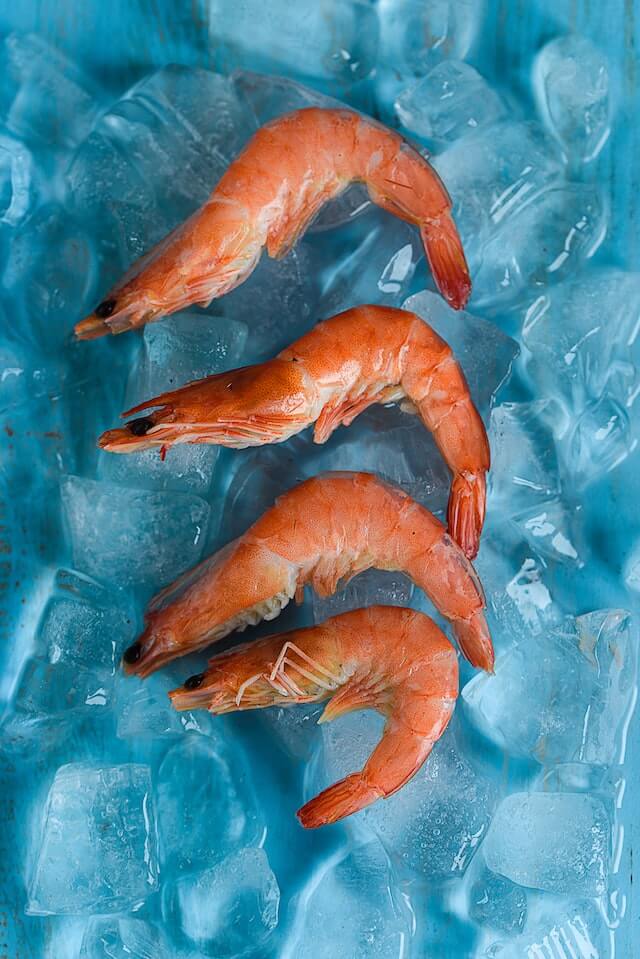 Microwaving shrimp is faster and safer than defrosting shrimp using most other methods such as leaving them on the countertop to thaw, or by using water.

You May Also Like:  How to Defrost Bread in Microwave? (Best Method)

It is also faster than defrosting in a refrigerator, but microwaving does have some risks associated with it. As mentioned above, the biggest risk is that microwaving can partially cook or overcook the shrimp, which can cause a loss of flavor and texture.

This method also has the potential to result in uneven cooking as not all parts of the shrimp will defrost at exactly once. As such, it’s usually best to combine some other thawing methods or follow the right recommendations to thaw your shrimp.

With that said though, defrosting your shrimp in the Microwave has many benefits compared to other methods of defrosting including speed, simplicity, convenience, consistency, and safety.

All the other methods of defrosting shrimp also involve some level of risk that microwaving does not. For example, defrosting shrimp on the countertop may result in bacterial growth while thawing with water changes everything about your shrimp including texture and flavor.

As such, thawing shrimp in the microwave is always a great method of thawing.

Is it safe to thaw shrimp in the Microwave?

The safety of defrosting shrimp in the microwave depends on a few factors, but it is entirely safe if done correctly. Heating shrimp at the correct temperature and in intervals is the most important safety precaution to consider when cooking them in the microwave.

Once you follow the right precautions, microwaving shrimp is completely safe.

However, there are a few risks involved after microwaving the shrimp.

The first risk is that the shrimp may not be defrosted then undercooked which won’t kill any harmful bacteria in the meat.

Another possible safety concern is that microwaved foods can become more rubbery if they are overcooked, which makes them hard to chew.

You May Also Like:  How to Defrost Chicken Thigh in the Microwave

Finally, some may feel concerned about radiation emitted by microwave ovens. But this isn’t a concern since the electromagnetic radiation caused by microwaves doesn’t do anything to your food.

While microwaving shrimp carries certain risks, these can be easily avoided by following a few simple steps:

By following these steps, microwaving shrimp is completely safe and healthy.

How to Defrost shrimp in the Microwave

To defrost frozen shrimp in the Microwave, remove it from the packaging and place it in a microwave-safe bowl with cold water or cover it with a paper towel. Set the Microwave to defrost mode or nuke the shrimp at 30% power for 15-30 second intervals. After each 30-second interval check if the shrimp is thawed. 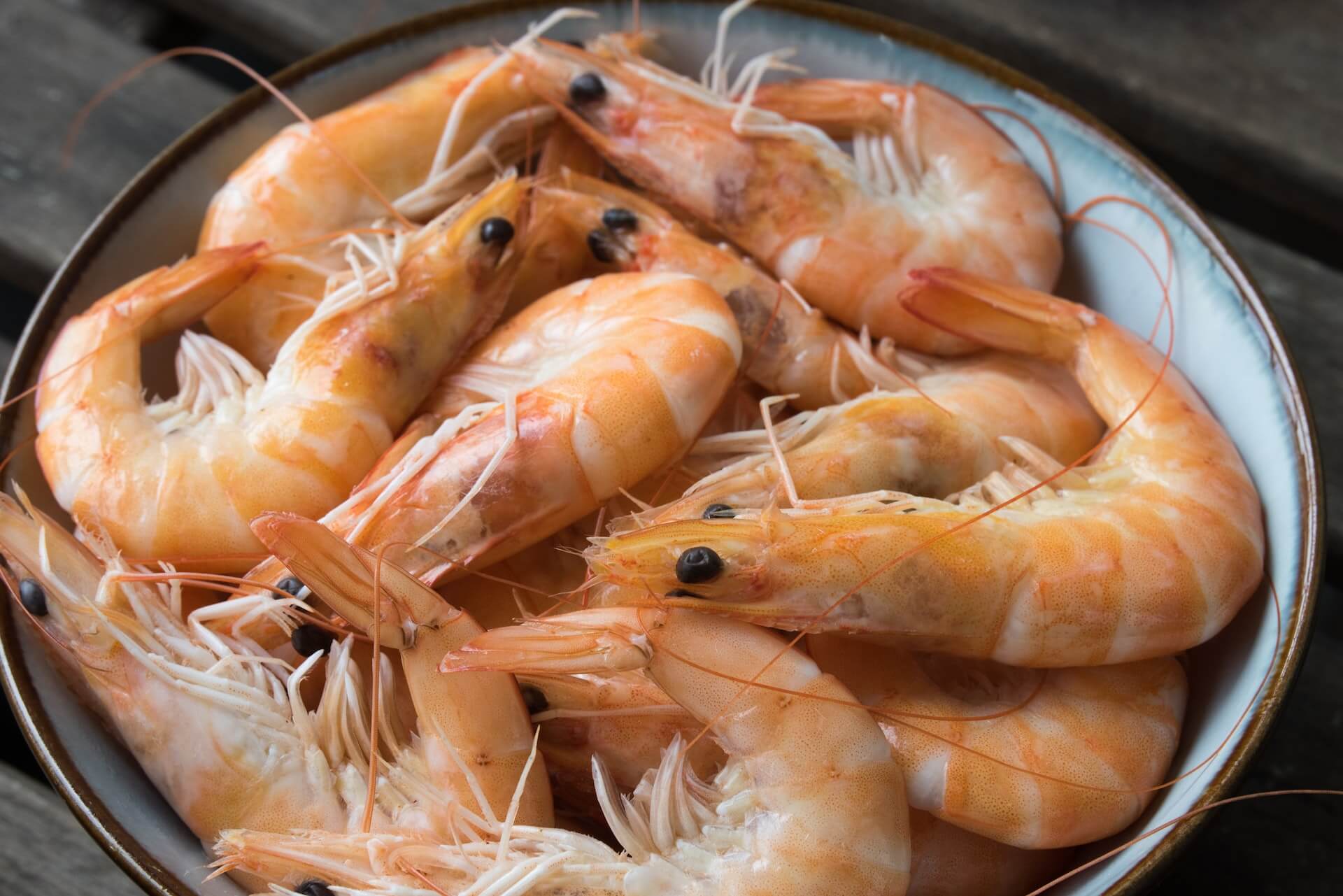 If it isn’t done thawing, make sure you flip or rotate the shrimp, then nuke it for another 30 seconds to ensure it thaws evenly. Repeat these steps until the shrimp is thawed.

Make sure you pay attention to the shrimp while it thaws in the Microwave. If you don’t pay attention and leave the shrimp to thaw for too long, then your entire batch will be overcooked or even spoiled.

This is why we recommend nuking your fresh shrimp at 30% power for 15-30 second intervals to avoid having any hot spots or overcooking within the food. This way, you’ll defrost frozen shrimp quickly at a consistent rate without overcooking it.

How long does it take thaw shrimp?

You May Also Like:  How to Defrost Turkey Breast in Microwave?

How long does it take to thaw frozen shrimp in water?

Open the shrimp, remove them from their packaging, and put them in a bowl of cold water. It will take about 10-20 minutes to thaw, depending on the size of the thawing shrimp.

If the raw shrimp is in water too long, it will start absorbing more water than it needs, which will cause it to get mushy and disintegrate. So you might need to put some salt into the water or thaw for the exact amount of time.

Is it OK to thaw frozen shrimp in the refrigerator?

Yes, if you plan ahead of time, defrosting shrimp in the refrigerator is ok. Moreover, it is one of the safest methods to thaw shrimp. All you have to do is put them in the fridge and let them thaw for about 12 hours. After they’re thawed, eat them within 48 hours.

By thawing the shrimp in the refrigerator, you eliminate the risks of changing the flavor and texture of the shrimp. Furthermore, you’ll also get rid of the risk of it developing bacteria which can cause food poisoning.

How do you defrost shrimp quickly?

To defrost shrimp quickly, let it thaw in the microwave at 30-second intervals for about 2 minutes. Or you could also put the shrimp in a bowl of cold water and allow running water to trickle into the bowl while the excess flows away. This will take about 10-20 minutes.

However, please be aware that defrosting shrimp in cold running tap water can lead to bacterial growth and a change in the quality of the shrimp. So it is not recommended by food safety experts.

You May Also Like:  How To Defrost Impossible Burger in a Microwave (Fast Ways)

Do I need to defrost shrimp before cooking it?

No, you don’t need to defrost shrimp before cooking it.

However, thawing the shrimp first preserves the taste, texture, and quality of the meat while also preventing you from undercooking the seafood since microwaving can heat it if not done right.

Unfortunately, thawing it first increases the risk of overcooking, but properly defrosting it in a microwave will help to reduce this risk.

Defrosting shrimp in the microwave is fast and easy. It is also efficient because it preserves their quality, taste, texture, and nutritional value better than any other technique except for making fresh shrimp from scratch.

On the other hand, cooking the shrimp while it is still frozen increases your cooking time by 50% and makes it easier to undercook the seafood if you don’t monitor the food closely.

The USDA recommends cooking shrimp to a minimum internal temperature of 120 degrees Fahrenheit. So, if you cook shrimp without first thawing it in the microwave, you will need to cook it for a longer time and ensure it reaches that internal temperature.

Can I refreeze defrosted shrimp?

Yes, you can keep defrosted raw shrimp in the refrigerator for a few days longer before cooking it. The USDA says that defrosted shrimp is safe to refreeze within the same time period. However, if the shrimp is not fresh and has spoiled, you should never refreeze it as once thawed under these conditions will increase your risk of food-borne illness.

If the shrimp were thawed using a microwave or any other method that is not recommended, you should never refreeze it.

You May Also Like:  How to Defrost Chicken in Microwave: Quick Answers Guide

As a general rule for freezing raw seafood: If the seafood was thawed and stored in temperatures between 40-140 degrees F then it should be placed in the fridge within 2 hours. Otherwise, it’s not safe to refreeze after that time period. If the meat was stored at 0°F or below it will keep safe indefinitely; however quality may diminish over time.

Tips to Defrost shrimp in the Microwave

Here are some tips to keep in mind when thawing frozen shrimp in the microwave:

Defrosting shrimp in the microwave is quick and easy. All you need to do is put it in a bowl of cold water or cover it with a paper towel, set your microwave for defrost mode at 30% power, check every 15-30 seconds until thawed. This way you’ll be able to avoid overcooking by following these simple steps without worrying about bacteria growth or flavor changes occurring during microwaving.

We hope that you will find these tips helpful for defrosting shrimp in the microwave.

Hi there, We're Corey & Elizabeth! We love experimenting with new recipes, learning kitchen hacks, and sharing our passion for cooking with others. More About Us →